Earlier today, reports of Youth Standing Committee Meetings were evaluated based on the recommendations and input of each Committee. The two-member panel that reviewed the reports of the young Members was Dr. Shoaib Suddle, Former DG FIA and Former Federal Tax Ombudsman?and Mr. Danyal Hassan, Advocate and Former Member Youth Parliament Pakistan.

Members also had a chance to visit Senate of Pakistan today. They were briefed by Dr. Syed Pervaiz Abbas, Additional Secretary about the Parliamentary history of Pakistan and working of the Senate of Pakistan. The young Members were also given an overview of the newly constructed Gali e Dastoor though a video report and were later taken to the gallery. It is a dedicated area on the first floor of the Parliament House Building. Describing the significance of this corridor, the guide from Senate of Pakistan said that it is the first step in compiling the Constitutional history of Pakistan. He further said that this Gali-e-Dastoor is a tribute to Pakistanis who worked hard for a sustainable democratic Pakistan. The large tiles on the floor represent the space and progress available to the people while the narrow ones signify the strangulation.

Following this, in the plenary session, Ms. Afia Waheed Khan (YP5-11-PUNJAB04), Ms. Saira Baig (YP5-59-GB02), Mr. Ghulam Abbas (YP5-37-SINDH02), Mr. Deepak Kumar (YP5-02-BALOCHISTAN02), Ms. Abeera Ashfaq (YP5- 09-PUNJAB02) and Ms. Aminah Qureshi (YP5-15-PUNJAB08) presented a resolution on the forced conversion of minorities. The Members suggested that this issue should be brought at the national level and should be implemented as done in Sindh.

In another resolution on providing 1 per cent quota for the special people at the National and Provincial Assemblies, Ms. Aminah Qureshi (YP5-15-PUNJAB08), Mr. Masood Ur Rehman (YP5-03-BALOCHISTAN02), Mr. Muhammad Ahmed (YP5-14-PUNJAB07) and Ms. Zubaida Abbasi (YP5-40-SINDH05) said that the name of special people should be changed to differently abled people instead of disabled.

Mr. Abdul Qayyum Achakzai (YP5-01-BALOCHISTAN01), Mr. Umer Shafique (YP5-34-PUNJAB27), Mr. Muhammad Talha (YP5-49-SINDH14) and Mr. Ahmed Bilal (YP5-12-PUNJAB05) presented a resolution maintaining and practicing transparency in CPEC project and making it public to the citizens of Pakistan. They also were of the view that grievances of the people belonging to comparatively under developed areas of Pakistan should be addressed at the earliest in order to ensure unity and harmony among the provinces of Pakistan.

The resolutions were adopted simultaneously.

The House proceedings were followed by a cultural night and a farewell dinner for the outgoing batch of 8th Youth Parliament Pakistan.

During session 5, MYPs had the opportunity to interact with Former Pakistan’s High Commissioner to India, Mr. Salman Bashir. He addressed the Members on “Improving Pakistan-India Relations” and said that a reset of Pakistan-India relations is the most important step towards stabilizing the security of the South Asian region. Pakistan’s policy of economic development, regionally as well, should be pursued. He expressed the need to explore focus on humanitarian issues as well as easy Visa processes. He further added that for dispute resolutions of geography, especially on Kashmir, this is not the appropriate time to look for a ‘Final Solution’. Focus should be directed at confidence building measures and common issues.

Ambassador (Retd.) Ashraf Jehangir Qazi addressed the young members of the Youth Parliament Pakistan on the topic of “Post Obama Pak-US relations & Regional Security”. He called Pakistan the United States of America’s most allied ally. While deliberating on the current US-Pakistani political scenario, he commented that Obama considered Pakistan to be selectively helpful. Estimating Trump’s policies, he commented that Trump is influenced more by personal relationships rather than concrete evidence. For this reason, Pakistan should capitalize on the first opportunity to invite Trump to Pakistan and give him a warm welcome.

The 8th Youth Parliament Pakistan was supported by the Danish International Development Agency, Government of Denmark as recognition of the importance of young people’s involvement in democracy and democratic practices. 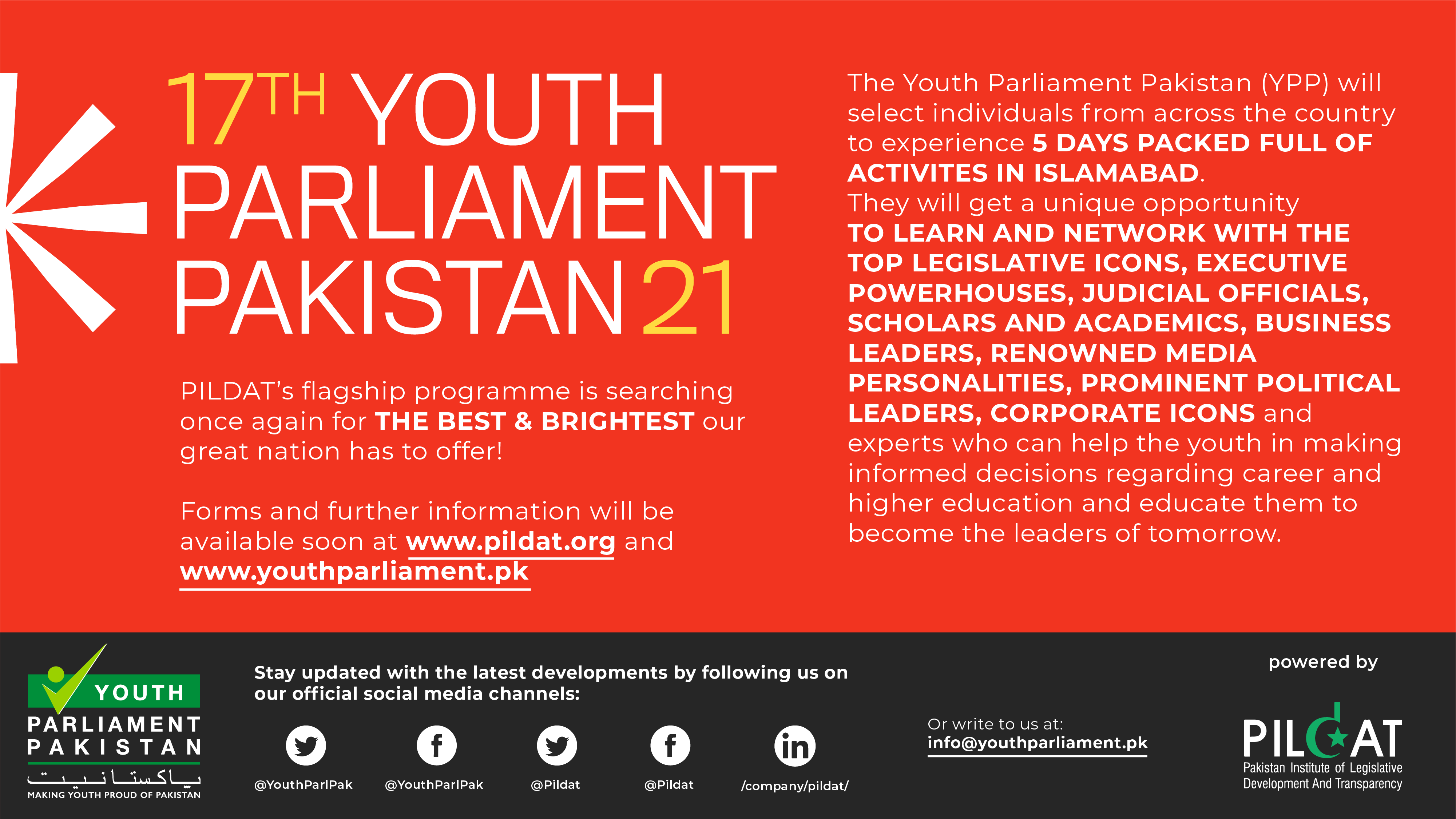