This is certainly not the first time that we are seeing floods wreaking havoc in Pakistan. We have seen the worst of it already in 2010. The deadly monsoon spell this year has inundated thousands of villages, killing hundreds and displacing millions. The death toll is continuously rising due to poor mismanagement and gross neglect on the part of authorities. Commenting on the scale of the current calamity, Michael Kugalman, Deputy Director of the Asia Program and Senior Associate for South Asia at the Wilson Center, took to Twitter, saying that “Pakistan’s 2010 floods, possibly the worst ever there, affected up to 20M people. The government estimates the current floods have affected 33M people-and yet the full extent of the damage likely still isn’t known. This is a humanitarian crisis of catastrophic proportions.” This is telling and warrants that the floods be treated as a national emergency.

But the real question is where do we lack as a state in order to minimize the impact of such a natural hazard? Is this the best we as a nation can do to protect our people? No. Surely the state can do better, and our beautiful, poor people deserve more than what the authorities have been delivering since the very outset. Where poverty is rampant and illiteracy is staggering, do we really need water to drown us?

Here is the issue: people have never been the priority. Eric Dezenhall, a crisis management expert and founder of Dezenhall Resources, who has long studied the organizational reasons for action and inaction in government and business once remarked that leaders “do what is easy and pays immediate dividends rather than doing what is hard, where the dividends seem remote.” Have we not seen this mindset manifesting itself before our eyes? There is hardly anything we see without donning our political lens. There is nothing our leaders do without weighing its electoral influence. It’s not flooding, it’s the paucity of political will that’s drowning our people.

Another question is do we need more policies, infrastructure or resources? No. We have enough policies, institutional structure and resources to muster better results than what we are currently producing. Do we need to think better? Yes. For instance, in the case of disaster management capabilities, we have our meteorological department that does forecasts, we have local authorities that ring alarms and we have NDMA and PDMAs that execute policies. What is missing then? It’s the will. It’s the mindset that is conducive to the real development and empowerment of the people. They need education. They need better jobs. They need better business conditions. A person burdened with his daily-life chores in the remote areas of Balochistan can never know what the meteorological department is saying if he is not equipped with necessary tools and knowledge.

Recently, when the people of Khyber Pakhtunkhwa and Karachi were hit by an intense and untimely monsoon pouring, our leaders were busy engineering political gimmicks. Later Balochistan, Sindh and some southern regions of Punjab saw heavy rainfalls. But this didn’t stop our leaders from playing politics. Some kept it limited to their foreign trips, and the rest to their political agenda. Do you see the problem here? It has always been the power, not the people, that sets their motives and priorities. This has to end. The people of Pakistan have suffered enough and are becoming aware of these horrible political showdowns.

Seven decades have gone by, the political crisis never took a backseat. Governance at large has been the first casualty of this crisis. Ahmad Ali Gul, director at the Center for Disaster Management wrote in Dawn that “The frequency and intensity of hazards that develop into disasters has drastically increased over the years. This is the result of a rapidly growing population, urbanization, climate change and poverty.” This suggests that no issue can be seen in isolation. It is high time that we put our priorities in the correct order. Crises like climate change would not allow politics to play along. We must make our people central to the business of the state.

Moreover, in the 21st-century world, we need more than just replicating policies and institutions. New challenges demand innovative thinking. And trying novel approaches requires a particular mindset conducive to their implementation and cost— and weak economies seldom try their hand at what’s unknown and risky. Therefore, unless the people are empowered in the true sense and spirit of the word, we would keep losing our people, lagging further behind in the race of progress and prosperity.

For now, we need to mobilize all the resources at our disposal, in national capacity, to come out of this ongoing catastrophe. Rescue & relief facilities should immediately be scaled up. Relief shelters and camps must be equipped with necessary food & health amenities. Since diseases are one of the most dangerous outcomes of floods, any relief efforts being made should keep hygiene & sanitation at the center. Once we have overcome this as we have always done in the past, we need to make our policies simpler, priorities clearer and the will stronger— unless we want to keep our heads stuck in the sand like the proverbial Ostrich and want more natural disasters to come and take us away. 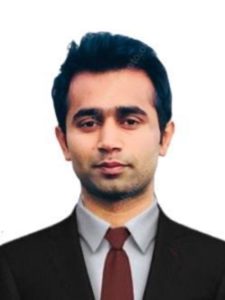 Kamran Khizar Gondal from NA-86 (Mandi Bahauddin II). He is a student of Political Science and has a graduation in Computer Science as well. Currently, he is aspiring to join the Civil Services of Pakistan. Being an educated citizen of Pakistan, he wants to serve his country and people to the best of his abilities. He believes in transforming his aspirations into reality. needs concrete efforts on his part, equipping himself with all the necessary knowledge, exposure and skills. In this regard, he considers joining the YPP as a lifetime opportunity and wishes to fully avail himself of its benefits. He is the joint secretary of Foreign Relations – II (Europe and Americas) Committee.