Pakistan has been experiencing persistent heatwaves and scorching temperatures well before the warmest months from the past couple of years. The intensity is increasing with every year and there is a real danger of food and water insecurity in the country apart from threats to the well-being of people of Pakistan. Whilst humans are trying to cope up with the changing climates and rising temperatures, there are many species who are unable to adapt to or cope up with the changing climatic patterns and are reportedly dying from heatstroke and dehydration.

Not to forget, global warming is causing the receding of the mighty himalayan glaciers which is leading to the influx of water on the Indus River system. Rising temperatures, increased flooding, variability in monsoonal season, below average capacity of water reservoirs, rising water and food insecurity and unplanned urban expansion are major threats facing the country. Lacking the capacity to store surface water run off ultimately results in the flooding in plateaus and plain areas that are home to the agricultural activity & productivity in the country and one of the major contributing sectors in Pakistan’s GDP. Karachi which is among the largest cities in the world and considered to be the backbone of economic activity in Pakistan is under severe threat, it is located at the junction where the Indus River Delta enters the Arabian Sea. Karachi is facing changing trends in monsoon patterns largely due to global warming. Uncertainty in predicting these events, unavailability of enough water reservoirs and poor sanitation are at the heart of climate crisis.

Cities in Pakistan are already vulnerable to the climate change due to shifting monsoon patterns, rising temperatures, heatstroke, water scarcity, food insecurity, supply chain disruptions, migration, disease epidemics, inequalities within and between cities and other environmentally sensitive sectors. Real Estate Businesses and mafias in the big cities have made urban lands a big source of earning money, living luxurious life and creating inequalities in urban centers. Only a handful of rich people decide the fate of urban areas who already have all the facilities and money to earn the luxury of livelihood. Low-income population and youth living in urban centers are bearing the cost of environmental degradation, heatwave, water scarcity and economic instability.

If there is no coherence between urbanization and sustainable growth of the cities, it may lead to degradation of environment, inequality, unemployment and erosion of economy and productivity. Same is the case with Pakistan who has the highest rate of urbanization in South Asia but all chaotic and haphazard growth of mega cities and suburban areas without any sound policies, urban planning, proper sanitation, sewerage, water and transportation infrastructure, waste disposal mechanism and social inclusion, all leading up to air, noise, water pollution, over abstraction of freshwater resources, rising inequality and environmental degradation.

The United Nations Population Division estimates that, by 2025, nearly half the country’s population will be living in cities. Therefore, it is imperative that we rethink and completely redesign our cities and urban areas, encourage eco-friendly practices, make available affordable and green houses, reduce rising inequalities and unemployment and enhance self-sufficiency. A visionary leadership and an empowered youth can play a central role in this transformation in their own cities and neighborhoods.

This is a reality that Climate Crisis is deepening day by day and needs immediate action now more than anything, lest it should make living unbearable for humankind. If not given national priority, it can have paramount effects on national security and sovereignty and will wipe out many species on which the human race relies upon for their survival. The question is, what is our readiness and preparedness at national and institutional level? Are we ready to face this challenge? What mitigation and adaptation strategies we are adopting? Do we have short term or long-term plans on which we can rely upon?

Governments in developing countries can only come to work when people stand to demand their rights and climate justice as a basic human right. Serious political commitment and civic engagement are necessary to resolve the urgent issues. First and foremost, our government should declare a climate emergency and escalating climate action should be a top priority for authorities and decision makers. Government should employ its best efforts to construct proper sanitation and irrigation systems and building of small & medium water reservoirs all along the Indus River and Coastal areas.

Successful transition requires redesigning our priorities so that we prioritize sustainability over short term profits. Pakistan needs to pay more attention to the social and environmental dimensions in policy making, planning and development and infrastructure building in urban cities and suburban sprawls. Similarly, the role of district governments is critical in resolving local problems and thus, Pakistan need to have empowered local governments for urban sustainability and building resilient societies and economies. Pakistan should go beyond recognizing its urbanization challenge to making effective policies, controlling its unplanned growth, ensuring sustainable practices by industries, transitioning to the renewable sources of energy, delivering urban basic services to the households, and working on establishing city partnerships with European cities who can help in successful transition of urban settlements and human capital development.

Mainstreaming UN Sustainable development Goals (SDGs), targets and indicators into national policies, institutional frameworks, planning and strategies and integrating the three dimensions of sustainability (Environmental, Social and Economic) are crucial for improved governance in Pakistan. Similarly, Pakistan can develop its own country specific indicators that are relevant for local policy-makers and institutional working in order to be effective for monitoring and evaluating the progress at the local level. It can help in channelizing the concerted efforts instead of silos and minimizing the polarization in decision making. In other words, synchronizing the institutional and organizational goals and objectives with SDGs will identify the priority areas that need to be expedited in order to achieve inclusive and measured success in climate and related areas. . 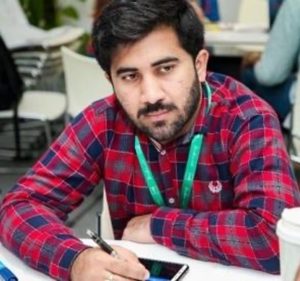 Hafiz Jawad Sohail is a climate activist and sustainability advocate. He’s a trained climate reality leader, UN volunteer and community leader. Having outstanding exposure and linkages in the area of SDGs, climate change and international development, Hafiz is associated with UN SDSN as Project Officer, climate ambassador with World Bank’s Y2Y community, Global Youth Climate Network – GYCN and a member of YOUNGO (official youth constituency of UNFCCC). He was a delegate to the COP26 (UN Climate Change Conference) that took place in Glasgow, Scotland and has served as the country coordinator of COY16 (UN Climate Change Conference of Youth). He’s a geoscience graduate followed by Masters in public policy & administration and currently pursuing his career with WWF-Pakistan as Sr. Project Officer in Freshwater Programme.